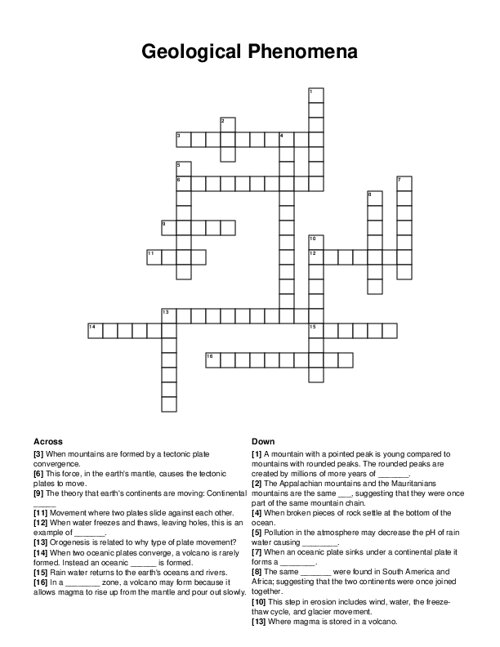 QUESTIONS LIST: OROGENESIS : When mountains are formed by a tectonic plate convergence., CONVECTION : This force, in the earth's mantle, causes the tectonic plates to move., CONVERGENCE : Movement where two plates move toward each other., WEATHERING : This step in erosion includes wind, water, the freeze-thaw cycle, and glacier movement., EROSION : When water freezes and thaws, leaving holes, this is an example of _______., DRIFT : The theory that earth's continents are moving: Continental _____, CONVERGENCE : Orogenesis is related to why type of plate movement?, FOSSILS : The same _______ were found in South America and Africa; suggesting that the two continents were once joined together., CHAMBER : Where magma is stored in a volcano., DIVERGENCE : In a ________ zone, a volcano may form because it allows magma to rise up from the mantle and pour out slowly., SLIP : Movement where two plates slide against each other., RUNOFF : Rain water returns to the earth's oceans and rivers., ACID RAIN : Pollution in the atmosphere may decrease the pH of rain water causing ________., SEDIMENTATION : When broken pieces of rock settle at the bottom of the ocean., AGE : The Appalachian mountains and the Mauritanians mountains are the same ___, suggesting that they were once part of the same mountain chain., VOLCANO : When an oceanic plate sinks under a continental plate it forms a ________., TRENCH : When two oceanic plates converge, a volcano is rarely formed. Instead an oceanic ______ is formed., EROSION : A mountain with a pointed peak is young compared to mountains with rounded peaks. The rounded peaks are created by millions of more years of _______.