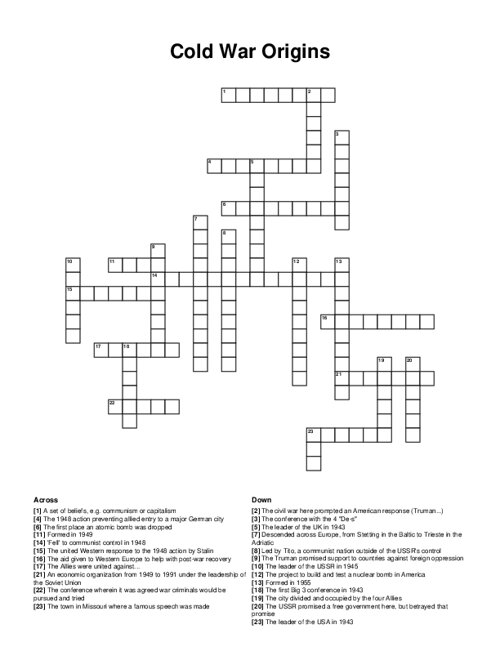 QUESTIONS LIST: HITLER: The Allies were united against..., NATO: Formed in 1949, WARSAW PACT: Formed in 1955, BERLIN: The city divided and occupied by the four Allies, STALIN: The leader of the USSR in 1945, FDR: The leader of the USA in 1943, CHURCHILL: The leader of the UK in 1943, FULTON: The town in Missouri where a famous speech was made, IRON CURTAIN: Descended across Europe, from Stetting in the Baltic to Trieste in the Adriatic, IDEOLOGY: A set of beliefs, e.g. communism or capitalism, TEHRAN: The first Big 3 conference in 1943, YALTA: The conference wherein it was agreed war criminals would be pursued and tried, POTSDAM: The conference with the 4 "De-s", MANHATTAN: The project to build and test a nuclear bomb in America, HIROSHIMA: The first place an atomic bomb was dropped, MARSHALL: The aid given to Western Europe to help with post-war recovery, DOCTRINE: The Truman <blank> promised support to countries against foreign oppression, GREECE: The civil war here prompted an American response (Truman...), CZECHOSLOVAKIA: 'Fell' to communist control in 1948, POLAND: The USSR promised a free government here, but betrayed that promise, BLOCKADE: The 1948 action preventing allied entry to a major German city, AIRLIFT: The united Western response to the 1948 action by Stalin, YUGOSLAVIA: Led by Tito, a communist nation outside of the USSR's control, COMECON: An economic organization from 1949 to 1991 under the leadership of the Soviet Union