Download and print this Motion, Forces and Energy crossword puzzle. 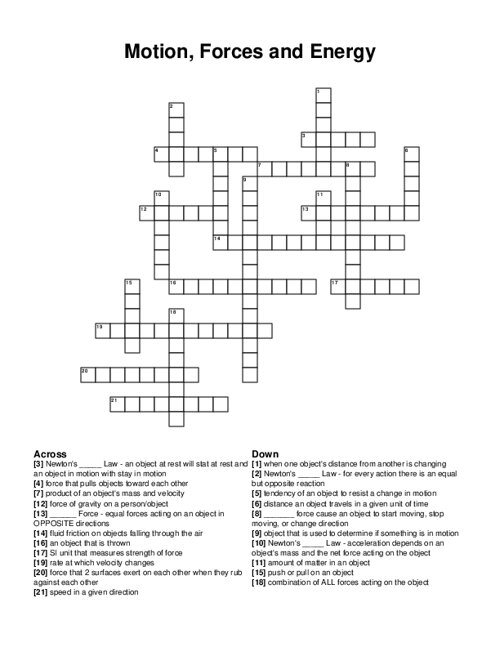 QUESTIONS LIST: speed: distance an object travels in a given unit of time, Net force: combination of ALL forces acting on the object, Momentum: product of an object's mass and velocity, Weight: force of gravity on a person/object, Force: push or pull on an object, Projectile: an object that is thrown, motion: when one object's distance from another is changing, Inertia: tendency of an object to resist a change in motion, Second: Newton's _____ Law - acceleration depends on an object's mass and the net force acting on the object, velocity: speed in a given direction, Friction: force that 2 surfaces exert on each other when they rub against each other, reference point: object that is used to determine if something is in motion, Acceleration: rate at which velocity changes, Mass: amount of matter in an object, Third: Newton's _____ Law - for every action there is an equal but opposite reaction, First: Newton's _____ Law - an object at rest will stat at rest and an object in motion with stay in motion, Gravity: force that pulls objects toward each other, Newton: SI unit that measures strength of force, Balanced: ______ Force - equal forces acting on an object in OPPOSITE directions, Air Resistance: fluid friction on objects falling through the air, Unbalanced: _______ force cause an object to start moving, stop moving, or change direction