Download and print this Electricity and Magnetism crossword puzzle. 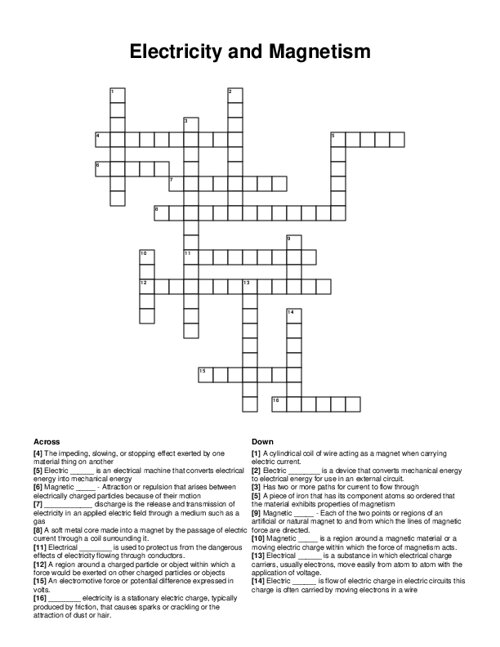 QUESTIONS LIST: Magnet : A piece of iron that has its component atoms so ordered that the material exhibits properties of magnetism, Voltage : An electromotive force or potential difference expressed in volts., Static : ________ electricity is a stationary electric charge, typically produced by friction, that causes sparks or crackling or the attraction of dust or hair., Electric : ____________ discharge is the release and transmission of electricity in an applied electric field through a medium such as a gas, Resistance : The impeding, slowing, or stopping effect exerted by one material thing on another, Insulator : Electrical ________ is used to protect us from the dangerous effects of electricity flowing through conductors., Electromagnet : A soft metal core made into a magnet by the passage of electric current through a coil surrounding it., Conductor : Electrical ______ is a substance in which electrical charge carriers, usually electrons, move easily from atom to atom with the application of voltage., Field : Magnetic _____ is a region around a magnetic material or a moving electric charge within which the force of magnetism acts., Pole : Magnetic _____ - Each of the two points or regions of an artificial or natural magnet to and from which the lines of magnetic force are directed., Generator : Electric ________ is a device that converts mechanical energy to electrical energy for use in an external circuit., Force : Magnetic _____ - Attraction or repulsion that arises between electrically charged particles because of their motion, Electric Field : A region around a charged particle or object within which a force would be exerted on other charged particles or objects, Parallel Circuit : Has two or more paths for current to flow through, Solenoid : A cylindrical coil of wire acting as a magnet when carrying electric current., Current :Electric ______ is flow of electric charge in electric circuits this charge is often carried by moving electrons in a wire, Motor : Electric ______ is an electrical machine that converts electrical energy into mechanical energy