Download and print this Force and Motion crossword puzzle. 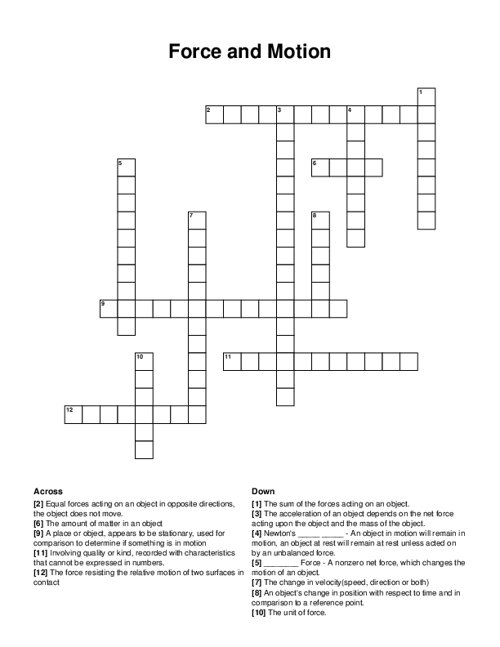 QUESTIONS LIST: Mass: The amount of matter in an object, Acceleration : The change in velocity(speed, direction or both), Reference Point : A place or object, appears to be stationary, used for comparison to determine if something is in motion, Unbalanced : ________ Force - A nonzero net force, which changes the motion of an object., Newton's Second Law: The acceleration of an object depends on the net force acting upon the object and the mass of the object., Qualitative: Involving quality or kind, recorded with characteristics that cannot be expressed in numbers., Motion: An object's change in position with respect to time and in comparison to a reference point., Friction: The force resisting the relative motion of two surfaces in contact, First Law: Newton's _____ _____ - An object in motion will remain in motion, an object at rest will remain at rest unless acted on by an unbalanced force., Net Force: The sum of the forces acting on an object., Newton : The unit of force., Balanced Force: Equal forces acting on an object in opposite directions, the object does not move.