Predator is an animal that naturally preys on others; means it lives by killing and eating other animals. Download and print this Predators crossword puzzle. 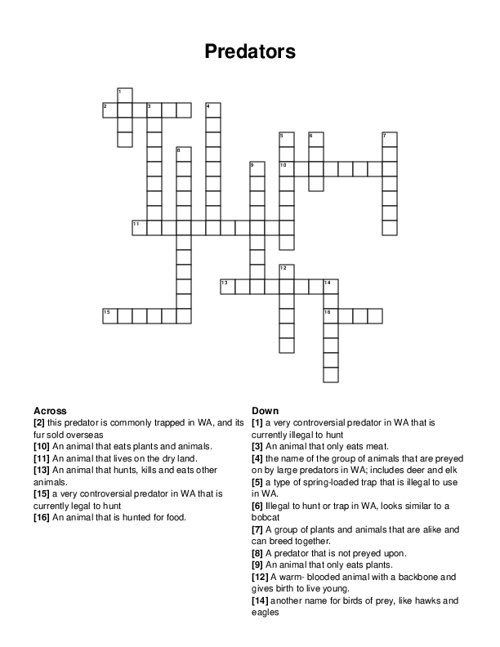 QUESTIONS LIST: Mammal: A warm- blooded animal with a backbone and gives birth to live young., Cougar: a very controversial predator in WA that is currently legal to hunt, Prey: An animal that is hunted for food., Terrestrial: An animal that lives on the dry land., Foothold: a type of spring-loaded trap that is illegal to use in WA. , Herbivore: An animal that only eats plants., Ungulates: the name of the group of animals that are preyed on by large predators in WA; includes deer and elk, Species: A group of plants and animals that are alike and can breed together., Carnivore: An animal that only eats meat. , Omnivore: An animal that eats plants and animals., Lynx: Illegal to hunt or trap in WA, looks similar to a bobcat, Raptors: another name for birds of prey, like hawks and eagles, Wolf: a very controversial predator in WA that is currently illegal to hunt, Predator: An animal that hunts, kills and eats other animals., bobcat: this predator is commonly trapped in WA, and its fur sold overseas, Apex predator: A predator that is not preyed upon.