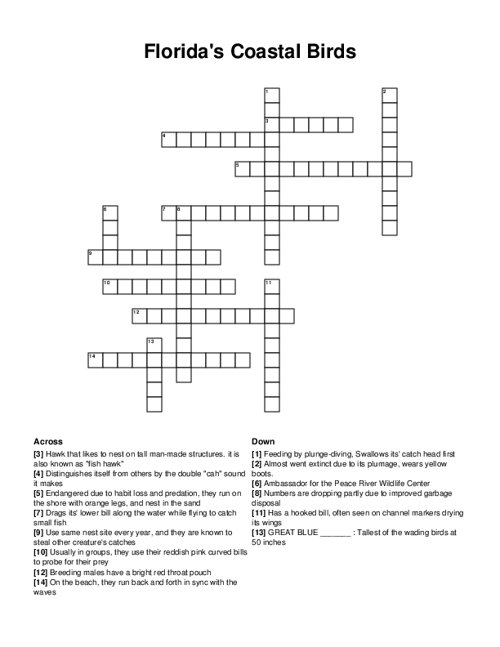 QUESTIONS LIST: WHITE IBIS : Usually in groups, they use their reddish pink curved bills to probe for their prey, LUNA : Ambassador for the Peace River Wildlife Center, BALD EAGLE : Use same nest site every year, and they are known to steal other creature's catches, FISH CROW : Distinguishes itself from others by the double "cah" sound it makes, PIPING PLOVER : Endangered due to habit loss and predation, they run on the shore with orange legs, and nest in the sand, OSPREY : Hawk that likes to nest on tall man-made structures. it is also known as "fish hawk", BROWN PELICAN : Feeding by plunge-diving, Swallows its' catch head first, BLACK SKIMMER : Drags its' lower bill along the water while flying to catch small fish, SANDER LINGS : On the beach, they run back and forth in sync with the waves, SNOWY EGRET : Almost went extinct due to its plumage, wears yellow boots., CORMORANT : Has a hooked bill, often seen on channel markers drying its wings, HERON : GREAT BLUE _______ : Tallest of the wading birds at 50 inches, FRIGATE BIRD : Breeding males have a bright red throat pouch, LAUGHING GULL : Numbers are dropping partly due to improved garbage disposal