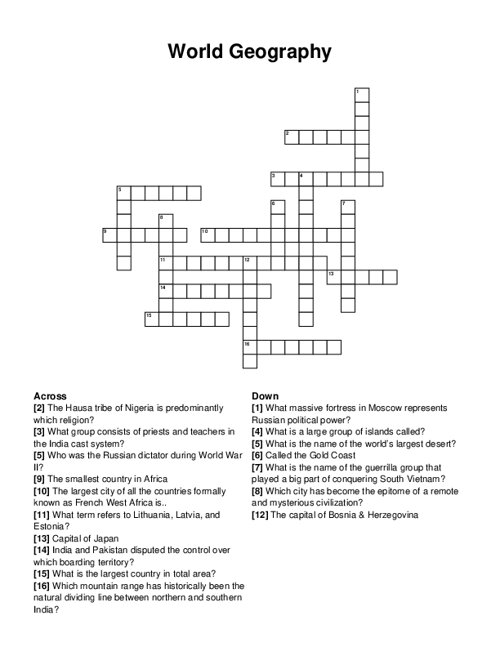 QUESTIONS LIST: Ghana : Called the Gold Coast, Sarajevo : The capital of Bosnia & Herzegovina, Muslim : The Hausa tribe of Nigeria is predominantly which religion?, Timbuktu : Which city has become the epitome of a remote and mysterious civilization?, Kremlin : What massive fortress in Moscow represents Russian political power?, Archipelago : What is a large group of islands called?, Russia : What is the largest country in total area?, Viet Cong : What is the name of the guerrilla group that played a big part of conquering South Vietnam?, Tokyo : Capital of Japan, Gambia : The smallest country in Africa, Brahmins : What group consists of priests and teachers in the India cast system?, Sahara : What is the name of the world’s largest desert?, Brazzaville : The largest city of all the countries formally known as French West Africa is.., Kashmire : India and Pakistan disputed the control over which boarding territory?, Vindhya : Which mountain range has historically been the natural dividing line between northern and southern India?, Baltic States : What term refers to Lithuania, Latvia, and Estonia?, Stalin : Who was the Russian dictator during World War II?