Download and print this Greeks and Romans crossword puzzle. 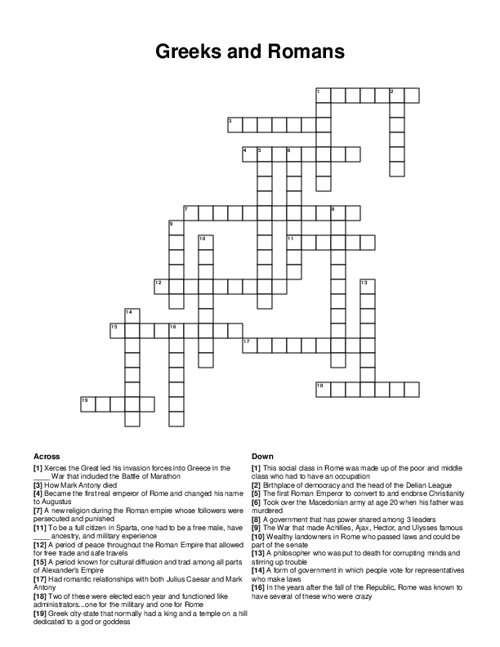 QUESTIONS LIST: Polis: Greek city-state that normally had a king and a temple on a hill dedicated to a god or goddess, Athens: Birthplace of democracy and the head of the Delian League , Paxromana: A period of peace throughout the Roman Empire that allowed for free trade and safe travels, Republic: A form of government in which people vote for representatives who make laws, Christianity: A new religion during the Roman empire whose followers were persecuted and punished , Constantine: The first Roman Emperor to convert to and endorse Christianity, Dorian: To be a full citizen in Sparta, one had to be a free male, have ____ ancestry, and military experience, Plebian: This social class in Rome was made up of the poor and middle class who had to have an occupation, Patrician: Wealthy landowners in Rome who passed laws and could be part of the senate, Consuls: Two of these were elected each year and functioned like administrators...one for the military and one for Rome, Octavian: Became the first real emperor of Rome and changed his name to Augustus, Cleopatra: Had romantic relationships with both Julius Caesar and Mark Antony, Suicide: How Mark Antony died, Trojan: The War that made Achilles, Ajax, Hector, and Ulysses famous , Persian: Xerces the Great led his invasion forces into Greece in the ____ War that included the Battle of Marathon, Alexander: Took over the Macedonian army at age 20 when his father was murdered, Socrates: A philosopher who was put to death for corrupting minds and stirring up trouble, Hellenism: A period known for cultural diffusion and trad among all parts of Alexander's Empire, Triumvirate: A government that has power shared among 3 leaders , Emperor: In the years after the fall of the Republic, Rome was known to have several of these who were crazy