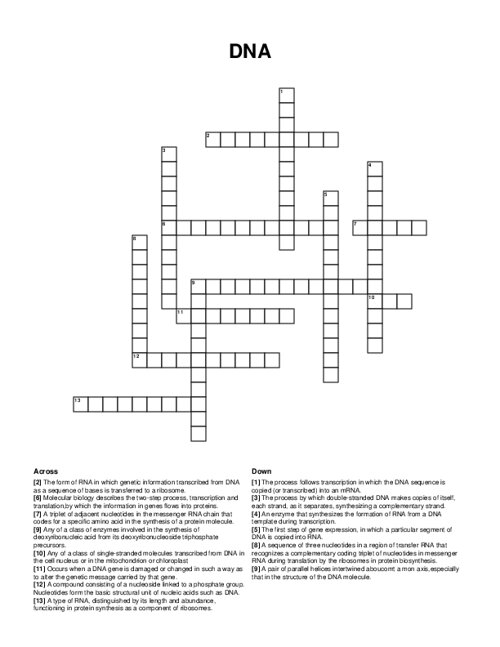 QUESTIONS LIST: Double Helix: A pair of parallel helices intertwined aboucomt a mon axis,especially that in the structure of the DNA molecule., Anticodon: A sequence of three nucleotides in a region of transfer RNA that recognizes a complementary coding triplet of nucleotides in messenger RNA during translation by the ribosomes in protein biosynthesis., DNA Polymerase: Any of a class of enzymes involved in the synthesis of deoxyribonucleic acid from its deoxyribonucleoside triphosphate precursors., RNA Polymerase: An enzyme that synthesizes the formation of RNA from a DNA template during transcription., Central Dogma: Molecular biology describes the two-step process, transcription and translation,by which the information in genes flows into proteins., Translation: The process follows transcription in which the DNA sequence is copied (or transcribed) into an mRNA., RNA: Any of a class of single-stranded molecules transcribed from DNA in the cell nucleus or in the mitochondrion or chloroplast, Messenger: The form of RNA in which genetic information transcribed from DNA as a sequence of bases is transferred to a ribosome., Mutation: Occurs when a DNA gene is damaged or changed in such a way as to alter the genetic message carried by that gene., Replication: The process by which double-stranded DNA makes copies of itself, each strand, as it separates, synthesizing a complementary strand., Transcription: The first step of gene expression, in which a particular segment of DNA is copied into RNA., Nucleotide: A compound consisting of a nucleoside linked to a phosphate group. Nucleotides form the basic structural unit of nucleic acids such as DNA., Ribosomal: A type of RNA, distinguished by its length and abundance, functioning in protein synthesis as a component of ribosomes., Codon: A triplet of adjacent nucleotides in the messenger RNA chain that codes for a specific amino acid in the synthesis of a protein molecule.