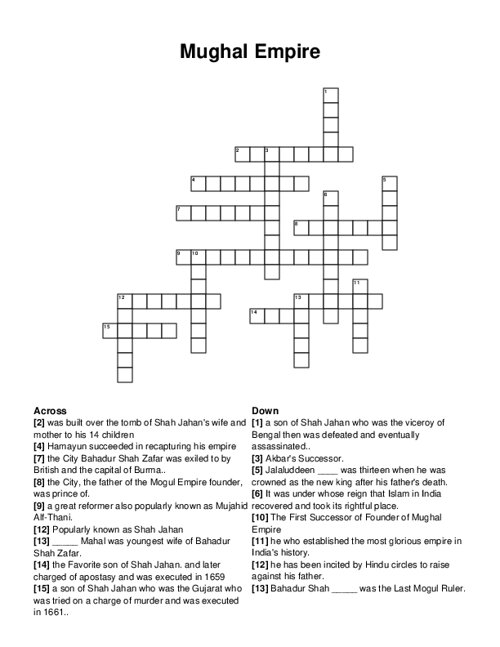 QUESTIONS LIST: Humayun: The First Successor of Founder of Mughal Empire, Murad: a son of Shah Jahan who was the Gujarat who was tried on a charge of murder and was executed in 1661.., Zeenat: _____ Mahal was youngest wife of Bahadur Shah Zafar., Babur: he who established the most glorious empire in India's history., Akbar: Jalaluddeen ____ was thirteen when he was crowned as the new king after his father's death., Aurangzeb: It was under whose reign that Islam in India recovered and took its rightful place., khurso: he has been incited by Hindu circles to raise against his father., Shuja: a son of Shah Jahan who was the viceroy of Bengal then was defeated and eventually assassinated.., Sher Shah: Hamayun succeeded in recapturing his empire , Taj Mahal: was built over the tomb of Shah Jahan's wife and mother to his 14 children, Jahanghir: Akbar's Successor. , Dara: the Favorite son of Shah Jahan. and later charged of apostasy and was executed in 1659, Zafar: Bahadur Shah _____ was the Last Mogul Ruler., Khurram: Popularly known as Shah Jahan, Rangoon: the City Bahadur Shah Zafar was exiled to by British and the capital of Burma.. , Ahmed Sirhindi: a great reformer also popularly known as Mujahid Alf-Thani., Fargana: the City, the father of the Mogul Empire founder, was prince of.