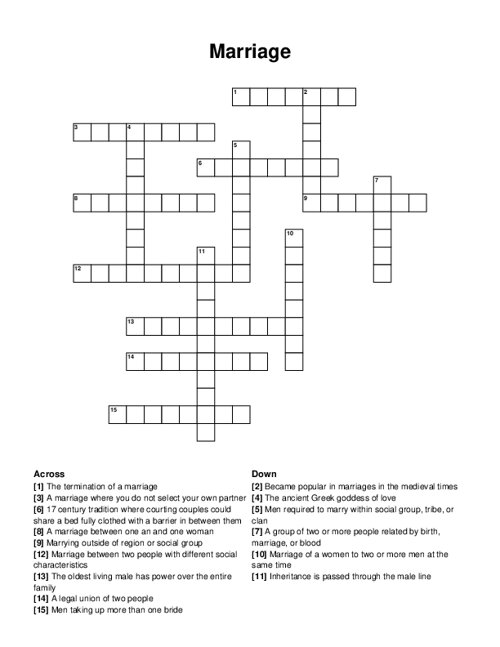 QUESTIONS LIST: ROMANCE : Became popular in marriages in the medieval times, APHRODITE : The ancient Greek goddess of love, PATRILINEAL : Inheritance is passed through the male line, EXOGAMY : Marrying outside of region or social group, POLYGAMY : Men taking up more than one bride, HETEROGAMY : Marriage between two people with different social characteristics, MARRIAGE : A legal union of two people, ENDOGAMY : Men required to marry within social group, tribe, or clan, DIVORCE : The termination of a marriage, FAMILY : A group of two or more people related by birth, marriage, or blood, MONOGAMY : A marriage between one an and one woman, ARRANGED : A marriage where you do not select your own partner, BUNDLING : 17 century tradition where courting couples could share a bed fully clothed with a barrier in between them, POLYGYNY : Marriage of a women to two or more men at the same time, PATRIARCHY : The oldest living male has power over the entire family