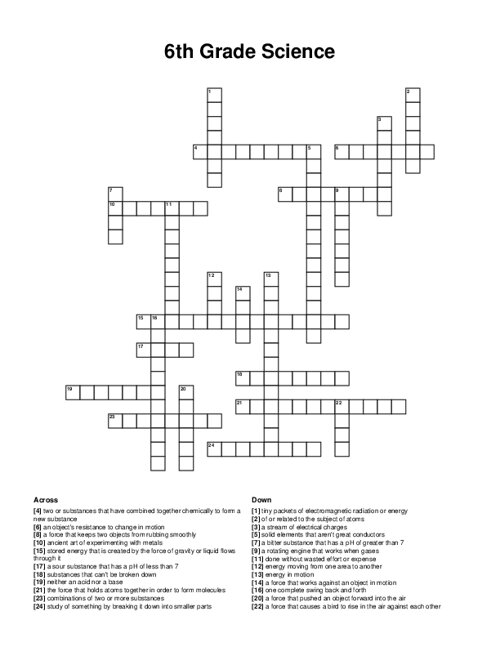 QUESTIONS LIST: Elements : substances that can't be broken down, Photons : tiny packets of electromagnetic radiation or energy, Compounds : two or substances that have combined together chemically to form a new substance, Lift : a force that causes a bird to rise in the air against each other, Alchemy : ancient art of experimenting with metals, Heat : energy moving from one area to another, Friction : a force that keeps two objects from rubbing smoothly, Chemical Bond : the force that holds atoms together in order to form molecules, Potential Energy : stored energy that is created by the force of gravity or liquid flows through it, Semiconductors : solid elements that aren't great conductors, Turbine : a rotating engine that works when gases, Base : a bitter substance that has a pH of greater than 7, Atomic : of or related to the subject of atoms, Kinetic Energy : energy in motion, Neutral : neither an acid nor a base, Current : a stream of electrical charges, Analysis : study of something by breaking it down into smaller parts, Efficient : done without wasted effort or expense, Oscillation : one complete swing back and forth, Inertia : an object's resistance to change in motion, Acid : a sour substance that has a pH of less than 7, Drag : a force that works against an object in motion, Mixtures : combinations of two or more substances, Thrust : a force that pushed an object forward into the air